Give the Students the Colored Pen

When I first started using inquiry-based learning (IBL), grading/assessing students caused me the most anxiety. When it comes to grading, I always feel like I am trying to solve an optimization problem. I want to maximize useful feedback to students and data to justify grades while minimizing the amount of time it takes for me to do the grading. After some trial and error, I’ve settled on a method that I feel is both effective and efficient.


One key component of my approach to IBL is to get students to the board to present their proposed solutions/proofs as much as possible. In my upper-level proof-based courses, the student presentations form the backbone of what we do each day in class. In my calculus courses, the student presentations play less of a role, but they are still an important part of the structure of the course.

In most cases, students are presenting material that was assigned as homework. In the past, I allowed students to freely annotate and/or modify their work during the presentations. One problem with this, however, was that it was usually impossible to tell what work a student had done prior to class. Certainly, in some cases, I was giving credit to students for work they did not do. For a brief time I experimented with collecting student work prior to the presentations, but this also bothered me since I felt the advantages of giving students an opportunity to learn something by comparing what they had done to what the presenter was doing outweighed the disadvantages.

Then Clark Dollard (Metro State University) suggested having students use colored felt tip pens to annotate their work during class. I remember dismissing this idea as silly, but a couple months later I decided to give it a try. It's such a simple thing, but it has had a big impact!

Here's my current approach to using the felt tip pens. If students are presenting material from homework that the class will ultimately turn in for a grade, the students in the audience are allowed to annotate their work, but only with one of the felt tip pens that I provide in class. Each day, I bring a box full of a variety of colored felt tip pens. The purple pens are the most popular and no one ever chooses the red ones. Students are encouraged to annotate their work as much as they want with the colored pens. Their grade on the assignment will not be impacted by what they write with the felt tip pen, but rather their grade is a result of what they had before they entered class. 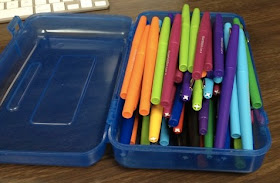 Having students use the felt tip pens enables me to discern what students had done before class. Moreover, students are encouraged to reflect in the moment on their work, not days later when I return it. I have nothing other than anecdotal evidence to support this, but I strongly believe that adoption of the felt tip pen approach has changed how my students annotate their work. Not only are the annotations different, but I can also tell that deep reflection is occurring. At the beginning of each semester, it's clear that a few students think that the idea is silly, but feedback from students (both in person and on anonymous course evaluations) has been extremely positive.

On a selfish note, the felt tip pen approach also allows for speedy grading. Since we’ve already discussed each of the problems in class, I don’t feel compelled to grade the work for correctness. Instead, I use a ✓-, ✓, ✓+ scale, which makes the grading of the homework lightning fast. All that matters is what the student had done before class.

In addition to the homework that is presented in class, I also assign an additional weekly homework assignment whose purpose is for students to reflect on the previous week’s presented homework. Each week, students are supposed to turn in two problems (from a subset of my choosing) that were presented during the previous week. These weekly assignments are supposed to be carefully written, and since this is the second time that students are working on the problems, the grading goes quickly, but I also feel comfortable grading them harshly. One significant advantage to this approach is that it forces students to revisit their annotations. In fact, I believe that having both the daily and weekly homework is key.

If you want to learn a little bit more about my felt tip pen approach, check out the slides from the "Effective and efficient grading for an IBL course" talk I gave at the 2012 Legacy of R.L. Moore Conference in Austin, TX.

All comments are moderated. Anonymous postings will not be published. See our Commenting Policy.